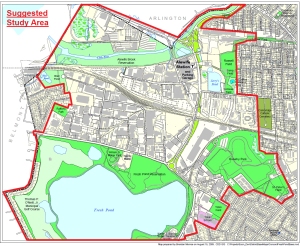 The citywide master planning process is now underway. The first step in the 3-year process is an RFQ (Request for Qualifications) for a scope of services and deliverables from the to-be-named planning consultant. The Community Development Department, which is overseeing the plan, released a draft RFQ and invited the community to send comments by May 8.

Here are comments the FPRA officers submitted. Our comments address the Alewife Study, which has been promised as an early phase/first area of focus of the citywide plan. The final RFQ will be issued the week of May 25. According to the city’s timeline, a consultant will be selected by the end of the summer, and the planning process will begin in September 2015. Read on and stay tuned!

Thank you for the opportunity to comment on the draft of the Cambridge Citywide Planning Request for Qualifications Section 1: Scope of Services. A careful reading of the document reveals a thorough, thoughtful and detailed framework and scope of services. Congratulations on a positive and creative first step in what we look forward to being a productive planning process!

Viewing the RFQ through the lens of a group specifically concerned with the future of the “Fresh Pond/Alewife district planning study (“The Study”) we are greatly encouraged to read that:

The Alewife will be an early action item that takes an integrated look at the interrelation between development, infrastructure, transportation and mobility, climate change preparedness, and place making in the Alewife area, and is expected to run concurrently during the early part of the work . . . and will need to be closely coordinated with the Climate Change Preparedness and Resilience Plan.

The Study is a deliverable, which will:

. . . develop and analyze up to three different scenarios for the future and examine the implications, trade-offs, evaluation criteria and other factors.

Early actions, development of alternative scenarios and coordination with the overall master planning process carves out the Alewife area as a special district demanding the kind of proactive and comprehensive attention we have urged for the past year.

In the context of our overall enthusiasm for the tone and scope of the RFQ and the particular attention it gives to the Alewife study, we offer ten suggestions for clarification and to enhance specificity.

What is the plan period? In particular, it seems essential to tie the planning horizons in with the climate vulnerability assessment, the goal of 80% GHG emissions reduction by 2050, and the net-zero 25-year timeframe, and to consider the possible outcomes of Boston’s 2030 citywide planning process.

The anticipated time line for selecting a consultant indicates that:

During the proposal review, we expect to host a public presentation by shortlisted teams. Members of the public will have an opportunity to view these presentations.

We suggest that members of the public have an opportunity both to recommend consultants for consideration in the initial pool (RFQ Distribution List) and to influence the decision of which firm is selected. How will those opportunities occur?

The RFQ does not include any mention of an advisory committee. We assume there will be a formal one in addition to other modes of communication and engagement. How will it be chosen? We suggest that there be an opportunity for the FPRA and others to influence its composition and for a residents group to be represented on it. We also recommend an Advisory Group for the “The Study” area and that residents and groups have an opportunity to influence its composition and be represented on it. A clear mandate should be given the two committees at the start of the planning process.

The RFQ places much emphasis on “early action” How early? We suggest establishing a clear timeframe for coming up with the three “study area” scenarios and making a decision among them. It is essential to integrate information about what has been constructed and is in the permitting pipeline in order to plan scenarios that reflect actual and expected conditions. We strongly suggest that any new major development proposals for the area not be approved before a formal choice is made among those scenarios and the proposal found to be in keeping with the goals of the scenario. It would also be helpful to clarify what types of actions can be taken before the rest of the study is completed. We hope that public investment in infrastructure, easements, public spaces, transportation linkages, and reforms to the special permitting process applied to the study area would be included in the actions.

We include a map which delineates what we think are the most meaningful edges for the “study area” (recognizing that there are clear connections across those edges). The area is wider than the 2005 Concord-Alewife Plan and more grounded in terms of the connection among impacted areas.

The RFQ makes the point that

The MBTA Red Line is the transit backbone of the city and along with many both public and private bus routes, connects Cambridge to the region and serves a vital function for the Cambridge economy.

It then goes on to distance itself from the T’s problems:

We urge framing this challenge in more positive terms: that attention should be given to how much the city and other cities can indeed influence the T and its operation and that such influence and pressure (and joint planning) is critical to the success of any future plan for the City let alone the Alewife. All means of transport (Red Line, buses, cycle ways, etc.) must be addressed so that the city can be an active advocate for transport improvements.

Can it really be asserted that the “majority of trips by both residents and workers are made by sustainable modes”? This section should also be strengthened to make specific reference to the goal of improving “sustainable modes” or “low carbon modes” of transportation to be consistent with the rest of the RFQ. Minimizing climate change vulnerability and GHG emissions will be an essential part of this task. We also suggest that the last sentence should emphasize that effective strategies to enhance transit service should be identified and incorporated into the citywide plan.

We suggest that the planning should promote spaces that “foster the cultivation of a welcoming environment and social resiliency,” not just “examine” them.

Cambridge . . . serves as a key connection between the heart of downtown Boston and the larger region beyond, and the presence of major employers and institutions makes it a regional destination in of itself.

. . . Cambridge seeks to plan for the future along with neighboring communities and the metropolitan area.

There is significant mention of the regional nature of many of the issues under consideration and the need to plan and work with neighboring communities. A more specific sense of how this process might be executed should be part of the planning process. For example, how will Cambridge involve the neighboring towns of Watertown, Belmont, and Arlington in a discussion of our mutual interests in mobility between jobs and housing, and to the Red Line at Alewife and Harvard Square, and on flooding issues?

(2) Recommend financial devices like Tax Incentive Districts that would ensure that the areas impacted by development have the tax resources to support the capital development and operation of public facilities.

(3) Identify the specific capital improvements that will safeguard the environment, serve the emerging community that redevelopment will produce, and protect the existing neighborhoods.

In conclusion, as we noted in a previous communication with CDD:

Our hope is that this Alewife study will finally confront and directly address the planning challenges that prior studies have not, namely how to realize the area’s place-making potential without compounding past mistakes. It’s going to take a great deal of vision, creativity and a much broader collaboration to succeed this time around . . .

The draft RFQ is a felicitous start. We look forward to continued serious consideration of the Alewife/Fresh Pond District study as we move ahead into actual planning and then to implementation. Thank you for considering our comments on this planning process and for your work in getting the process rolling.

2 thoughts on “Citywide Plan to Focus on Alewife Area First”