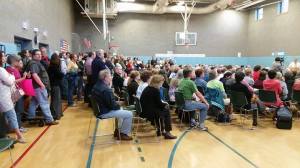 May 21 meeting (photo by Coalition to Save the Mugar Wetlands)

Some 300 members of the public, including many from Cambridge and Belmont, attended a “Community Presentation and Feedback” session held on May 21 by Oaktree Development regarding their proposal to develop a site in east Arlington bordering Rte. 2 owned by the Mugar family (across Rte. 2 from the “Belmont Uplands”). Most of us are familiar with the wetlands of tall phragmites reeds to our right as we drive west on Rte. 2. For some 50 years the owners have been looking to develop the property, initially for a Star Market, and then large buildings (of decreasing size over time). The current proposal is 219 units on the 17.7 acre site, of which 10.5 acres would be donated to the town for conservation. The town of Arlington has been trying to buy the entire property for conservation as well, but the owners have not been interested. After having their last development proposal turned down by the town, the owner is now using the 40B mechanism, which allows proposals that include affordable housing to avoid some aspects of local regulation. Oaktree’s Sr. V-P Gwen Noyes noted that while 40B does not require any dialogue with the community, they would like one nonetheless. The owner is determined to build on the site. The meeting was preceded by a rally objecting to the development.

The Mugar parcel is outlined in orange.

Oaktree Development, a locally-owned Cambridge firm, has a long track record of innovative energy-efficient, transit-oriented and mixed-use developments, including 30 Cambridgepark Drive next to the Alewife T station, which is entirely within the 100-year flood zone (citizen litigation over flood storage resulted in a cash settlement in favor of those challenging the development, which was built in 2002). Gwen noted that she and her husband (Art Klipfel, an Oaktree co-founder) live in a co-housing development in Cambridge that they built 17 years ago. She also serves on the board of the Cambridge Affordable Housing Trust..

The key messages from the developer were:

The public’s concerns and comments:

Many of Oaktree’s claims were countered by the public. State Rep. Dave Rogers spoke, saying that all the state delegation representing Arlington was opposed to the project. He noted that rather than the 4.5 acres not in the floodplain map showed by the developer, the FEMA maps show all but 1.5 acres in the floodplain. With climate change and resulting increases in precipitation intensity there will be even less land that is not in the floodplain in the future. Traffic delay estimates are understated, he noted. He said the delegation would do anything in their power to prevent this development from happening. A written statement from State Senator Ken Donnelly had been submitted with the same sentiments.

Arlington Soccer Club was opposed due to the possible increases in flooding resulting from the project threatening the use of adjacent Thorndike Field, which is essential to their program. A Sustainable Arlington representative reiterated that with storm intensity increasing due to climate change flooding will increase, which is indeed already happening.

There was no Q&A. Other comments included:

Editorial comments: This account is based on notes taken at the meeting, so any errors are mine (and my ears). Please let me know. I left before the public comments ended, so I missed quite a few. A couple of points stand out from my “Alewife” perspective.

And let’s be clear, this whole site is lowlands . . . there are no “uplands”.

Further resources: Coalition to Save the Mugar Wetlands on Facebook; Your Arlington has a detailed report of the meeting: www.yourarlington.com/search/news-archive/32-development/7627-mugar-051815.html; Belmont Citizens Forum Newsletter (May/June 2015, p. 12) www.belmontcitizensforum.org/. 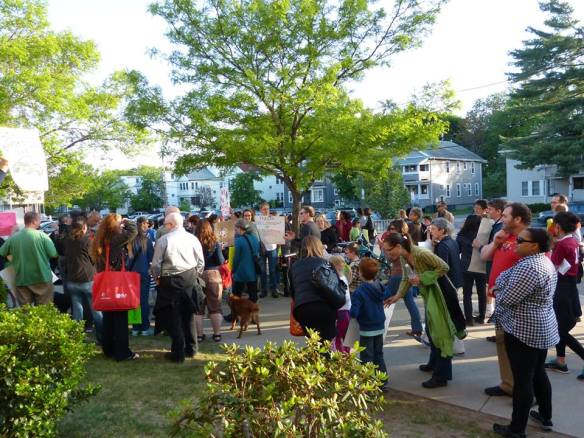