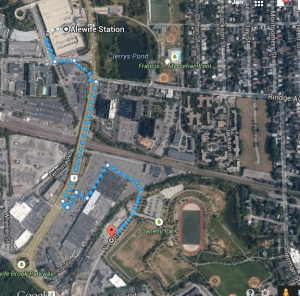 The Planning Board will hold its fourth hearing on the proposed 93-unit development at 75 New Street on Tuesday, September 16 at 7 pm. The FPRA submitted these comments on the project. If you support our position let the Planning Board know by attending the hearing or emailing the Board via CDD staff member Liza Paden (lpaden@cambridgema.gov).

Since 75 New Street first came before the Planning Board in February, the Fresh Pond Residents Alliance has expressed the community’s strong opposition to the project’s design. The most recent round of revisions has not changed our position.

At an FPRA neighborhood meeting last week, the 70 or so residents attending voted unanimously to continue to oppose the project for the following reasons:

1. Variations in paint color and façade treatments notwithstanding, the proposed building remains too monolithic for the long narrow site and fails to meet the urban design guidelines for the area with respect to breaking down building mass, designing at a human scale, and activating the street. By any reasonable interpretation of these guidelines, this project should be two buildings, at least one providing some street-level retail or a public space. The proponent’s claim that the additional construction costs (the necessity of having two elevators instead of one, and an unspecified, though likely modest, reduction in the proposed 93 units) would reduce its profit margin should not drive the decision to grant special permits.

2. Further, we remain unconvinced that this is a transit-oriented location, where maximizing housing density is responsible public policy. There is no direct, safe access to the Alewife station for the residents of the proponent’s existing 54-unit building (Phase I has now occupied for almost 4 years), and there is very little chance that this situation would improve by the time the residents of the proposed 93 units in Phase II arrive in a year or so. The Fresh Pond Shopping Center likely will remain an intractable obstacle to safe pedestrian passage through its “wild west” (and non-conforming) parking lot until there is a change in ownership – which could be many years from now based on the long-term lease that Whole Foods has secured. We appreciate Councilor McGovern’s recent policy order suggesting improvements to the dirt shortcut up/down the hill to the parkway bridge, but implementation relies on the actions of third parties (Vast Capital Management and the state DCR) whose short-term capital spending priorities may not align with the community’s desire for greater safety or the city’s desire to facilitate the creation of more housing. Residents of Rindge Avenue can attest that safer connections between the Alewife area and the Danehy area have been an avowed priority — and an unmet need — for decades. Permitting new development that places scores of new residents at risk when no solution is within sight is irresponsible. The planning board and the community need to be apprised of the development potential of the remaining parcels on New Street, so that the total burden of development on this street can be properly assessed. It is our understanding that property ownership is being consolidated and that we are likely to see more development on the street in the near term.  We believe the 2012 TIS should be updated to reflect current conditions and that current and future residents of New Street would benefit from access to the Alewife TMA shuttle service.

3. The feasibility and timing of the redesign of New Street to provide safe, continuous sidewalks and bike facilities along its entire length remain uncertain and unresolved, respectively. We have requested copies of the recently completed street survey from the Department of Public Works, and we understand that a public process to review possible designs will begin later this fall. Until feasibility is assured and funding for the complete reconstruction of the streetscape is in the capital budget, it is irresponsible to permit new residential development on New Street. Tax increment financing should be considered to help fund street improvements that will benefit current and future residents. Such funding might also be used to enhance the strip of parkland opposite 75 and 87 New Street for the whole community’s benefit (for example, a small tot lot, bocce courts, parkour fitness stations, or chess tables might be additions that would help activate the street).

4. The necessity of reconstructing New Street also raises the issue of the knowing the extent of the soil and groundwater contamination throughout the entire New Street/Bay State Road area, and the need for a public involvement process to ensure close local oversight and strict compliance with all state regulations when this and subsequent parcels are redeveloped. The proponent’s assurance that construction at 75 New Street would pose no risk to the current residents of 87 New Street cannot be taken at face value, as excavating heavily contaminated soil could release airborne toxins into open windows or through the HVAC system next door. Any risk abatement plan for 75 New Street must protect residential abutters as well as construction workers and future residents of the building.

5. The most recent version of the application states that the proponent will retain professional acoustic services to ensure that the future residents of 75 New Street are protected from the noise from the loading docks at the shopping center. We hope that the proponent will involve Whole Foods in the process to ensure that the timing of their data gathering is truly representative of typical operations. We would note that the TIS data gathering included dates just before and just after Memorial Day weekend in 2012. There is no mention of protecting residents from fumes from trucks idling at the loading docks or those coming from the auto body shop next door. Air quality testing should be performed to assess the level of risk and nuisance posed to future residents with windows facing both the loading docks and the auto body shop.

6. The promise of a 5-foot easement along the property line shared with the auto body shop for a future pedestrian connection to the shopping center or a bike path is weak tea without the assurance that the owner of the neighboring property would voluntarily agree to provide an equal easement if that parcel were to be redeveloped in the future. The city should consider offering a transfer of development rights to incentivize the abutter to provide such an easement. The city should use its leverage over Pan American, which owns the portion of the railroad right of way behind the New Street site and is also seeking relief from the city for its North Point developments, to kick start its negotiation to acquire this unused land at a reasonable price or as a donation before any additional public benefits are awarded to that company. A bike path running behind New Street would enhance future developments as well as this one and would be an asset to the city’s bikeway system.

7. In reviewing the latest plans with the proponents last week, we questioned the functionality of the shared loading area for moving vans serving both buildings; we hope they have revised that part of plan. The fact that 87 New Street was constructed without any off-street delivery or loading area is a serious deficiency the proponent has the opportunity and obligation to remedy with Phase II of the development. The likelihood of multiple moving trucks needing adequate space to efficiently load/unload on peak turnover days without blocking the street or the driveways must be addressed in a future iteration of the site plan. This is a safety issue with so many children using New Street to access Danehy Park.

In summary, 75 New Street remains the poster child for the deficiencies of a piecemeal planning process, and the design still fails to meet a standard that warrants the public benefit represented by Special Permits. To improve future outcomes for this area and to truly embrace the process and goals of urban place making, residents and other stakeholders must be included in the conversation much sooner than has been the case with this project. We hope that will be the case going forward with this proponent and with the others lining up to redevelop the Fresh Pond/Alewife area.