Last week’s transportation committee hearing was a testament to the human capacity for denial and collective paralysis in the face of large systemic problems. Listening to the presentations by city staff, a newcomer (say, someone who arrived from outer space) might have come away believing no transportation crisis exists in the Alewife area, that plans to massively increase housing density around the area won’t aggravate the problems (which, remember, don’t really exist, and to the extent they might exist, are not within our control because they are mostly regional in origin), and that any remaining problems can be remedied by improving bike paths.

As longtime resident and de facto transit ombudsman Stephen Kaiser (the only transportation engineer in the room) noted, there was not a single photo of a car, bus, truck, or train in an hour-plus presentation about the city’s most notoriously gridlocked roadways. Also missing from the presentation: any mention of the New England weather conditions, which make biking (or walking more than very short distances) unpleasant, unsafe, or impossible for several months of the year. And that’s just during the short, dark days of winter; the Alewife area is also the most vulnerable to catastrophic flooding in a future of rising sea levels and more frequent and severe “100-year” storms.

Climate change may seem unrelated to a discussion of transportation, but the display of collective denial and paralysis afflicting local officials mirrors that of national and international policy makers confronting climate change. Reading an op-ed by former Treasury Secretary Henry Paulson in Sunday’s New York Times, I was struck by the parallels:

This is a crisis we can’t afford to ignore. I feel as if I’m watching as we fly in slow motion on a collision course toward a giant mountain. We can see the crash coming, and yet we’re sitting on our hands rather than altering course.

We need to act now, even though there is much disagreement … on how to address this issue while remaining economically competitive. They’re right to consider the economic implications. But we must not lose sight of the profound economic risks of doing nothing…..

It’s true that the United States [Cambridge] can’t solve this problem alone. But we’re not going to be able to persuade other big carbon polluters [other state and town officials] to take the urgent action that’s needed if we’re not doing everything we can do to slow our carbon emissions and mitigate our risks.

The stated intent of the June 19 hearing was “to address the traffic, transportation and access to transit issues in the Fresh Pond/Concord Avenue/Alewife area, with a view toward understanding the impact of recent development trends in the area.” Despite the good intentions of Councilor Dennis Carlone, who chairs the Council’s Transportation and Public Utilities Committee, the three-hour meeting deftly sidestepped the central question: what will it actually take for development at the density envisioned in the Concord Alewife planning study to produce a livable new neighborhood where walking, biking and public transit are viable and attractive year-round options for the majority of residents and commuters, and regional through-traffic does not continue to increase and undermine all of the above improvements? Do we have an actionable plan, the funding, and the political will to make these big changes happen, or will we remain on “a collision course with a giant mountain” and leave the problems of gridlock, public safety, and air quality to future generations to solve? 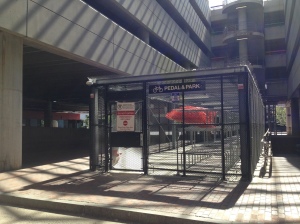 Bike cage at the T holds 488 bikes. Over 550 bikes were counted recently.

To steer off the collision course will require ample creativity and leadership and more coordinated regional planning than we have see up to now. Listening to the staff’s small-bore suggestions, you would never guess that Cambridge is a world capital of innovation. When more powerful stakeholders in the nation’s best educated zip codes fail to demand that our city think big, residents are reduced to complaining about truck traffic and bus stops on Concord Avenue, left turns on Mount Auburn Street, and access to Whittemore Avenue from Route 16. These are all legitimate concerns, but they are distractions — like worrying about a leaky faucet when your house is underwater. The recent brouhaha over proposed new regulations on Uber and other Internet ride-sharing services is a sign that we can expect to encounter many roadblocks en route to systemic change.

One place to look for creative approaches is the MIT Media Lab, which just released a new interactive map of Cambridge that “visualizes the efficiency of the public transit infrastructure for different neighborhoods in the city.” (*See the Media Lab’s more detailed explanation below.) It shouldn’t surprise anyone to see that the map classifies our area as a “transit desert.” Are we waiting for the flood to make the desert bloom?

Note: We will post the presentations given by city staff when they are available. Requests to share the files on the morning following the hearing received “out of the office” replies. As a best practice going forward, we suggest that all presentations by city staff be made available to the public prior to any committee hearing, so that we don’t spend the bulk of the time mutely viewing charts and graphs with too much information to absorb and assumptions we cannot question without further study. The last-minute addition of a third staff presenter effectively ran the clock, so that public comment and discussion did not commence until about 75 minutes into the hearing. Councilor Carlone graciously extended the meeting past its scheduled end time to allow for more comment, though the City Clerk was not present to record a good deal of it once Councilor Benzan left and there was no longer a quorum. The committee’s other two members, Leland Cheung and Craig Kelley, did not attend, citing schedule conflicts.

* The MIT Media Lab Social Computing Group’s explains of the transit efficiency map, which is part of the You Are Here project, which also includes this iteration showing the fastest mode from point A to B:

Public transit is one of the most equitable and environmentally sustainable forms of urban transportation. Robust public transit infrastructures can free us from using cars, lessen pollution, ease congestion, and empower communities.

This map visualizes the efficiency of the public transit infrastructure for different neighborhoods in the city. For each point in the city, we query the times it takes to reach every other point by riding public transit and by driving a car. We then divide the former with latter. This ratio represents the efficiency of a transit system. We normalize each score by dividing it by the maximum ratio in a city and multiplying by 10, giving a relative transit efficiency score for each neighborhood. Darker areas (closer to 0) are transit deserts where cars are a necessity, while lighter areas (closer to 10) are places where public transit represents a more viable alternative.

We believe that a vibrant public transportation network is an essential feature of the modern city, and we hope these maps can contribute to a discussion around the future of these networks.

To make this map, we gridded up the city at the block-group level, and then computed the time using each mode of transport from the centroid of the source block group to the centroid of the destination block group using the Google Maps API. For driving, we added a buffer time for parking and walking, and then we divided both resulting times and colored the block-group based on the minimum.

A more complete calculation of transit efficiency would not only take into consideration the time it takes, but the true cost of each mode of transport, including the cost of the vehicle, the cost of fuel, and the effect on air quality, and we will explore this in future maps. 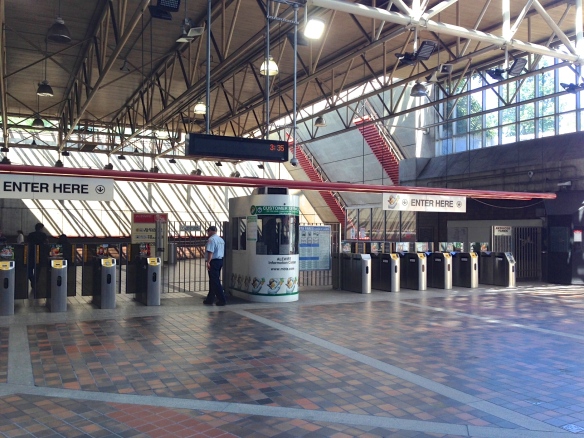 All quiet on a Sunday afternoon at the Alewife T.

5 thoughts on “Roadblocks to Change in the Transit Sector”