The Planning Board will hold a public hearing on July 8 to review a proposed residential development near the Alewife MBTA station. Below is an extract of the comments that the FPRA officers submitted to the Board for consideration. The complete document is here (17 pages).

An Extract from our Comments:

We see the proposal to build 378 luxury apartments and a 9-story parking garage at 180R CambridgePark Drive as very much a work in progress, one that still raises numerous concerns and leaves significant questions unanswered. This proposal is the fourth in a series of large residential projects in the Alewife “Triangle” put forward by The McKinnon Company and its private equity backers (Blackstone Real Estate in this instance) in a sequence that has requested special permit relief for each project without a comprehensive neighborhood plan and without a full analysis of the total projected population or the level of neighborhood services needed.

Once these four new projects are completed and leased over the next two to three years, there will be over 3,000 residents in the Triangle District, excluding the hundreds of commuters who work in the area’s commercial buildings. When finished, the Triangle district will have a greater population than Cambridge Highlands or Strawberry Hill, and may approach the population levels of Agassiz, MIT/Kendall, and, possibly, even West Cambridge. In short, we are rapidly turning one of the least dense population centers in the City into one of the densest. (That newly dense area also happens to be the most flood-susceptible section of the City). In addition, the high concentration of small units aimed at a single market sector is a dangerous precedent for the City, and every effort should be made to expand the range of unit types and affordability to more closely resemble the socio-economic diversity of other similarly sized neighborhoods.

This fourth McKinnon project is also by far the largest; 180R CambridgePark Drive offers 401,768 square feet of residential space plus a structured garage that holds 661 cars, covering over 80% of a full city “block” measuring 750’ long by 150’ wide. Uncounted in the FAR calculations, the 9-story parking garage at the center of the project would amount to some 5.5 acres of structured parking. At 105 feet tall, the East portion of the residential building would be taller than any of the surrounding buildings in the district. From a land use standpoint, the proposed housing represents a significant improvement over the current use (a 571-car surface parking lot), but there are equally significant tradeoffs that argue against granting special permits to increase height, reduce setbacks, and allow above-grade parking on such a long, narrow parcel sandwiched between the railroad tracks and existing buildings fronting CambridgePark Drive. The net increase in parking (220 spaces, for a total of 791 spaces) runs counter to the premise that this represents smart, transit-centered design, and argues against the requested permit to exclude the above-ground garage from FAR. Ironically, for a site located a mere 3/10 of a mile from a T station, the need to create parking for shared-use commitments appears to be what is driving the design.

The zoning requirements for the site are complex, given that the property under consideration lies within 3 different zoning overlay districts (Parkway, Flood Plain, and AOD-6) in addition to its base Office 2A zoning designation. The result is that numerous Special Permits (11 in all) would be required to construct the proposed development as currently designed.

While we have framed our detailed comments around the criteria enumerated in the relevant articles of the Zoning Ordinance, we do feel that narrowly following a special permit checklist on a project-by-project basis ignores the broader context and the cumulative impacts that the addition of 1,467 residential units and an estimated 4,838 daily vehicle trips generated by the five new buildings in the Triangle alone[1] are bound to have on the surrounding neighborhoods. To be sure, the proposal satisfies a key planning goal to create more housing (though nearly all of it is targeted to meet the perceived market demand for small luxury units), but there also are significant uncounted externalities (detriments to traffic, housing affordability, and the flood plain environment and its adjacent conservation area), which taken together defeat many of the other goals of the Ordinance and the area planning study, and should give us all pause about continuing blindly on this course without more serious and objective consideration. With the citywide master planning process now in its initial goal-setting phase, there are widespread calls for more rigorous scrutiny of such large-scale development until a new growth plan is completed.

After the rapid and largely unchallenged permitting of four large residential projects in the Triangle since 2012, it is now time to recalibrate the cost-benefit scale and to tip the balance more in favor of citizen input and creating a vibrant and functional mixed-use neighborhood with a greater sense of place, rather than galloping ahead to construct more small luxury units to serve a narrow slice of Cambridge’s diverse community – and to create wealth for the global private equity funds investing in the Cambridge real estate market.

In conclusion, we believe that just because an opportunity was missed to get the Triangle “right” with past projects, we should not ignore an opportunity to get it right this time. In fact, this project may be the final and best chance to redress the area’s shortcomings, as it represents the last large, undeveloped parcel in the Triangle District. In light of that, we ask that review of this project be thorough and transparent with ample time provided for citizen input of any subsequent design changes. Where clear criteria exist, we ask that they be considered broadly and applied rigorously. Where changes are needed to improve the project for the public good, we ask that the Board exercise its statutory duty to do so by attaching appropriate and binding conditions to any approval. In short, we ask that all parties work towards reaching the best possible outcome for the community as a whole.

View video produced by the developer 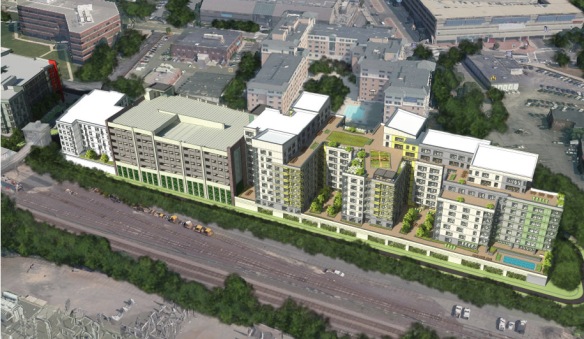