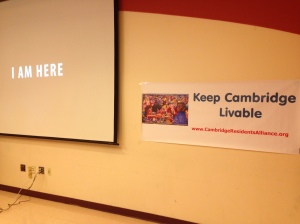 The FPRA presented at the Cambridge Neighborhood Summit on June 7 in Central Square. (Our presentation is below.) Organized by the Cambridge Residents Alliance, the first-ever citywide summit brought together residents and activists from all parts of the city for a full afternoon of discussion on “How to Keep Cambridge Livable.”

Among the 100-plus attendees were City Councilors Dennis Carlone and Nadeem Mazen, who presented on the master plan process they initiated. Listening closely was Kathryn Madden, the urban planner who will be facilitating this month’s series of “Cambridge Conversations” to give residents a voice in framing what likely will be a multi-year planning process.

As Councilor Carlone stated in his presentation, one goal of a master plan is to leverage growth to the public’s advantage, by asking what kind of city the residents want and assessing the community’s needs. He called for stronger design review and more consideration for community benefits in the special permitting process, and suggested that the larger the project, the greater the requirement for elements that enhance and benefit the community. Councilor Mazen stressed the need for improved issue tracking and follow-up on public participation by the Community Development Department and other city agencies, while noting that, “We are working against market forces, intractable problems, and an organizational culture.”

A number of the presenters and audience members cited the need to change the permitting process so that the burden rests with the developer to prove a project benefits the community, rather than on residents to prove otherwise, as it is now. Seth Teller, a leader of the Neighborhood Association of East Cambridge and an MIT professor of computer science, said that the city was not asking enough questions of developers. “It shouldn’t be our job to have to ask these questions,” he stated. “We believe the planning board does have the power to say ‘no’.”

In a panel on “Improving the City Planning,” CRA leader Nancy Ryan and veteran Harvard Square activist Pebble Gifford noted that planning board currently counts five members with expired terms, including the longtime chair who has served since 1988. Gifford, a retired powerhouse in residential real estate sales, asserted, “We have to take our city back from real estate interests.”

This is the Concord Alewife planning study area. The Triangle is in North Cambridge (Area 11), the Quadrangle is in Area 12, and New Street, which is just outside the study area, belongs to “Neighborhood 9”.

This area has been called Cambridge’s “final frontier.” Now that Kendall Sq has been mostly built out, the Quad and the Triangle represent the greatest remaining development potential in the city.

And since Kendall’s redevelopment included so little housing, and Alewife is on the Red Line, the area looks like a logical place for transit-oriented design…except there are some big challenges and missing pieces, which we’ll discuss later.

The Fresh Pond Residents Alliance includes residents of all these areas along with many in the Huron Village area of West Cambridge (Area 10).

These neighborhoods are all bound together by Fresh Pond/Alewife Brook/Rt 16 parkway.

At the time of the Concord Alewife planning study, in 2003-05, the only residents on the committee were from the Cambridge Highlands neighborhood out Concord Avenue toward Belmont, which only has about 700 residents.

Before the FPRA started earlier this year, very few citizens paid much attention to this “No Man’s Land” since the study areas are located far from their designated neighborhoods’ core populations. This is one of the reasons why development has been able to proceed at the pace that it has, accelerating in the past 3-4 years.

But the bordering neighborhoods are directly impacted.

It’s now becoming clear that what happens in these areas is going to have an enormous impact on us all because of the sheer size of the under-developed area, its challenging transit geography, and its proximity to Fresh Pond, Danehy Park and the Alewife Reservation.

This is the corner of Mooney St and Smith Place. The commuter rail tracks are to the left and behind them is one of the new buildings on Cambridge Park Drive in the Triangle.

The RR tracks cut off the Quad from the Triangle.

Rezoning in 2006 gave incentives for conversion of formerly industrial properties into high-density housing. REITs see the goldmine in building what we call “spaceships” — large luxury rental buildings with amenities for their residents but nothing to enliven the surrounding area, which desperately needs both improvements to the pedestrian/bike infrastructure and a sense of place.

Instead, the development has brought only a profusion of small units at rents that are at the high end for Cambridge but are lower than comparable buildings in Boston.

This is the view from the Rt. 16 bridge looking west. The Alewife T is in the distance on the right. The large building you see is 30 Cambridge Park Drive, with 312 rental units built in 2002. Soon there may be an even larger 378-unit apartment building and a 9-story garage in the open area between it and the tracks (project known as 180R CPD).

The first “spaceship” in the recent invasion landed in 2010 at 87 New Street.

It’s a pre-fab building by AbodeZ, the same developer that is constructing on Concord Ave by Trader Joe’s.

The same developer of this building and the one near Trader Joe’s is proposing 93 more units next door as Phase II of the New Street development.

This is the former J&C Adams Windows manufacturing facility at 75 New Street, where the 93-unit building is proposed. The planning board held hearings in February and May. They will make their decision at a third hearing in July.

The discontinuous sidewalks on New Street have been a flashpoint at the public hearings. The FPRA’s position is that it’s not “transit oriented design” unless it’s actually easy and safe to walk to the T.

This is Phase I of the AbodeZ development on Concord Ave. at Wheeler St. next to the Trader Joe’s rotary. 61 rental units plus retail on the ground floor.

Phase II, proposed next door where Bank of America is, would add another 48 units.

Over in the Quad, this is the newly completed Atmark building near the old BBN complex on Fawcett St. A 2 BR unit rents for $3,100, plus parking. There are no 3 BR units.

Its accessibility to the T would be improved if a proposed bike/pedestrian bridge is built over the commuter RR tracks. The idea of a multi-use bridge has long been discussed, and the feasibility is finally being studied.

A tsunami of development is going on in the Triangle – 4 new buildings and another – the largest on of all (400,000 s.f.) – will come before the planning board this summer.

This is the new “Vox on Two” apartment building on the site of the former Faces nightclub. Its driveway is right on Route 2. (227 units)

Cambridge Park Drive is a dead end street whose only outlet is onto Rt 2. Off to the right is the Pfizer building at the end of the cul-de-sac. 160 CPD will have 398 units.

This is a 400,000 sf complex with 378 units and a 9-story garage – it would be the fifth spaceship to land on Cambridge Park Drive.

The numbers and the speed are astounding. 1779 units in the Triangle alone.

Each of these projects has required special permits. Each has been approved ignoring the cumulative impact on the area’s capacity to absorb so much growth so rapidly. The 6 projects permitted or constructed and the 2 proposed would add: 2,050 units with 4,485 vehicle trips/day and 5,147 transit trips/day.

In past few years, more development has already been permitted than the Concord Alewife study projected for 2024. The CA plan envisioned the addition of 2.8 million sf by 2024. We are already at 3.5 million – 10 years ahead of schedule.

98% of it is housing. None of the other goals of the plan have been implemented.

1. Everything else that makes a neighborhood!Mixed use, small retail, public spaces that vibrant new areas, a sense of place. So far, what we’ve gotten is “parking for people.”

2. A better balance of housing. A profusion of smaller luxury units in hotel-like buildings won’t solve the affordability problem or keep Cambridge diverse. More supply probably won’t cool demand. One size does not fit all of Cambridge.

3. Pedestrian/bike connections and transit infrastructure that get people out of their cars. The traffic cannot be written off as a regional problem and simply ignored. We are not yet a car-free society.

The city’s long-awaited climate change vulnerability study will have implications for the Alewife floodplain. Are we tempting fate by building so densely in this area?

The Fresh Pond-Alewife area is the poster child for the problems of piecemeal planning and a planning board that takes a very narrow view of its authority to shape how an existing planning study is implemented, leaving it to outside investors/REITs to decide what’s built based on what’s good for their bottom line rather than what’s good for Cambridge. This is why we need a master plan and more residents to speak up and say that we care about how Cambridge’s final frontier is developed. 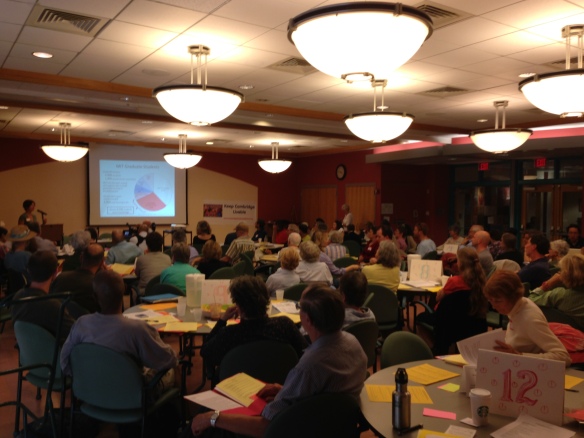