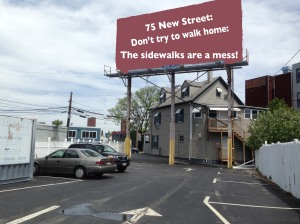 One thing we can say, 75 New Street always draws a crowd. On May 20, a week after the FPRA faithful filled the Tobin cafeteria for a discussion of the project, more chairs had to be added to the second floor room at City Hall Annex to accommodate the members of the public spilling out into the hallway, as the Planning Board resumed its review of a project that has become the “poster child” for ill-conceived development.

Three hours later, the planning board ran out of time and postponed its deliberation on the matter until July 22. The deadline for their decision was extended until July 31. In the meantime, the developer was instructed not to make any further design changes. There will be no public comment period at the July 22 meeting, so that the board will have time for its public deliberation. Written comments may still be submitted until July 15, however.

Twenty-nine residents spoke including Councilor Dennis Carlone. Councilor Marc McGovern also was present. No expressed support of the project, though Carlone did acknowledge that the developer had improved the design from what was originally presented in March. (True.) Carlone also said, “We are making a decision about a street that isn’t designed. The city has to move on New Street.”
In the revised plans presented at the meeting (but not available to the public beforehand), the developer increased the number of 3-bedroom units to 16 (from 0 in the original plan) and is in talks with DPW to widen the sidewalks in front of both their buildings by 2′ to accommodate 12 to 15 large street trees (that the street widening appears to come at the expense of the grassy area on the park side of New Street was a point contention the hearing — the minimal front setbacks for the building would not change.). There is not yet a formal plan or rendering of how this new street plan would look or work dimensionally.
In addition to a litany of complaints about New Street’s poor circulation and pedestrian/bike infrastructure, and resulting risk to public safety and quality of life, there was a great deal of frustration and palpable tension in the room about narrow special permit criteria that seem to ignore the public good and the larger context.
To that point, the FPRA’s Doug Brown noted that over $150m of real estate has sold in the Concord Alewife “Quad” in the past 5 years, and the Alewife area may soon see new development that is the equivalent of 20 Sullivan courthouses. He called this piecemeal approach to planning a “giant experiment” in which Cambridge is the proverbial “canary in the coal mine” (to quote this week’s Boston Globe story on the current real estate “frenzy” in Cambridge.) As Brown’s presentation at the May 13 FPRA meeting showed, recent development (98% of it residential) has already exceeded the Concord Alewife study’s 2024 projections.
Equally frustrating to many was the fact the planning board accepted at face value the developer’s traffic report that omitted several recent projects in the area as well as park usage and asserted that the project’s anticipated 3% increase in trips along New Street would have a negligible impact on the street’s safety and congestion. As one resident noted, when a system is already at the breaking point, even a slight increase in volume can have disastrous and paralyzing effects. (Talk to air traffic controllers.) Three percent of a large number is not insignificant.
Given that New Street itself was never planned to support high-density residential development, many believe that the planning board now must take a wider and longer view on what constitutes a “detriment” to the public good. As Hutchinson Street resident Gregory Rochlin noted, “The planning board is supposed to be protecting the public interest. If it was just a matter of reviewing a series of criteria, it could be done by a computer. The reason we have a planning board is because the decision is going to be partially subjective.”
So between now and July 22, the planning board has a great deal of public testimony, objections and questions to consider, as well as its own role in making decisions that will affect the entire city for years to come.
Thank you to everyone who wrote emails, signed our petition and spoke up at the hearing.