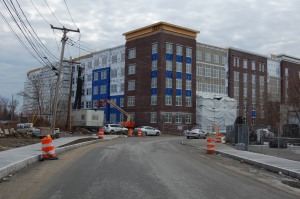 The expression “There’s no there there” sums up the recent surge of residential development in the Alewife area. Merely adding thousands of units of housing does not make a new neighborhood if there’s no overarching vision or investment in creating a strong sense of place and community.

A master plan would help define a vision for Cambridge’s “Final Frontier,” but the city doesn’t have one, despite our Community Development Department’s insistence that a zoning map, an growth policy document, and a patchwork of area planning studies are the equivalent. Without a comprehensive master plan to guide, coordinate and balance development, Alewife has become a magnet for what a friend calls “spaceships” – giant apartment buildings that have landed on formerly industrial streets. Spaceship buildings are inward-facing, self-contained housing pods that contribute little to the public domain.

“The best urban places are made up of people doing very different things.”
-Tim Love, President, Boston Society of Architects 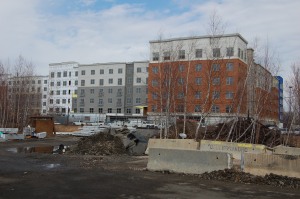 Spaceship buildings don’t create an urban community because this type of single-purpose development doesn’t give residents the opportunity to do “very different things” near where they live. Since 2004, we have added over 2.4 million square feet of housing in the Alewife/Fresh Pond area, almost three times the amount of new retail and commercial space combined during the same period. This is almost twice the amount of residential development that the Concord Alewife Planning study projected would be built by 2024.

Yet there are no new town squares with stores, restaurants and services, no new community centers, schools or churches, no new playgrounds or parks. There are the all-important “third places” that neighborhoods need to survive and thrive (the first and second places are homes and offices). There is no master plan to say where such community-building amenities are most needed and where they should be located, and no financial incentive for anyone to build them. The profit is in building housing, specifically small luxury units in developments that maximize the density allowed by up-zoning and special permits, which incentivize the conversion of formerly industrial sites to residential use. That part of the 2005 Concord Alewife planning study is working quite well, thank you. The rest, not so much.

So, what we are left with is spaceships – plus another City Council meeting on Monday, April 28, when the debate will continue about whether we need a master plan and, if so, which city officials (the Council or the CDD) should lead the initiative.

Expect more spaceships because, so far, no one is pressing for limits on up-zoning and special permits during the two to three years it could take until we have a master plan in hand.

Recent articles on the master plan debate and Alewife development:

The Mass. state law that spells out the nine required elements in a master plan (Chapter 41, Section 81D 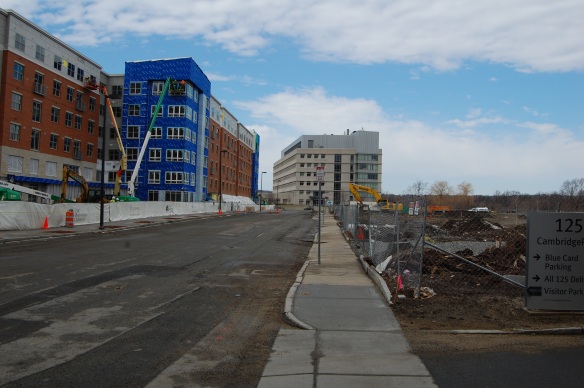