Two new buildings facing each other on Cambridge Park Drive will hold 642 apartments. The Pfizer building sits at the end of the cul-de-sac.

Sunday morning I took an exploratory, and revelatory, bike ride, and I feel as if it’s time for a reality check. Is the gargantuan scale and density of all this new development  around Alewife really such a smart idea, even if it is near transit? As a friend asked recently, “Have we drunk the density Kool-Aid?” Folks, I fear we have.

As our City Manager noted recently, “this city really likes to spend money on programs and do things” and development raked in $17 million in building permit fees alone, which help keep residential property taxes low. The last frontier on tap to slake our thirst for development happens to be right on top of our already very densely populated city’s largest and last urban wild. A state park, the 120-acre Alewife Brook Reservation is part of the Mystic River floodway; it is our safety valve when — not if — we experience one of those 100-year storms. Even a “mere” Category 1 hurricane would flood the entire Alewife area as well as parts of East Arlington, North and West Cambridge. And that’s not even taking into account the certainty of rising sea levels and the possibility of a major storm arriving during a full moon at high tide.

So why are we galloping ahead to develop every buildable parcel along this fragile area? The southern end of the Reservation is sandwiched between Cambridge Park Drive and Acorn Park Drive, where millions of square feet of residential and office space are encroaching. Within just a couple of years there will be 1,562 apartments on Cambridge Park Drive, a dead end street bounded by the Fitchberg commuter rail tracks on one side and the Reservation’s wetlands on the other. The street’s sole outlet is onto gridlock-prone Route 2 at the already D-rated Rindge Avenue intersection. The intersection’s grade will fall to an E after the addition of the 378 units in the latest proposal. An E is a F with grade inflation.

Following my morning bike ride, I got together with Anne-Marie Lambert, one of a group of Belmont and Cambridge residents and groups like the Friends of Alewife Reservation who have spent the past decade fighting the development of the Belmont Uplands, a 15-acre forest abutting the western tip of the Reservation (three acres are actually in Cambridge.) A total of 298 units (60 of them affordable under the state’s 40B provision) are planned on the parcel’s five buildable acres. A substantial portion of the Silver Maple Forest, a rare and treasured floodplain habitat, would be sacrificed on the altar of housing development. To note, this area is about a mile to public transit, but is right off Route 2, making it auto-centric rather than transit-oriented development.

Anne-Marie and I spent two-plus hours talking about the storied history and the uncertain future of what used to be called The Great Swamp. Much of the area’s history and vulnerability to flooding is detailed in this presentation that Anne-Marie gave at the Sustainable Belmont Meeting in April 2014.

One historical fact I learned from Anne-Marie really struck home: The malaria epidemic of 1904 prompted the state to seize the Great Swamp, drain it and turn it into conservation land to lessen the threat to public health while protecting its natural function and habitat. Over the past century, the state has sold off parcels to private parties and a substantial portion of the former wetlands have been developed and paved, compromising their natural ability to absorb storm water runoff and flooding along the Mystic River watershed. Recently, Cambridge spent millions (and cleared over three acres of the Reservation) to construct an artificial wetland to hold the storm water redirected by the federally-mandated sewer separation project that has turned West Cambridge into a mini Big Dig. Why are we continuing to develop the Great Swamp when now, more than than ever, it is needed to perform its natural flood mitigation function? My answer: an addiction to development has blinded our city’s planners and policy makers to the lessons of history and the laws of nature.

See more photos of the Alewife Reservation and encroaching development.

Looking across the newly constructed storm water wetlands toward Cambridge Park Drive where 1,562 apartments will be. 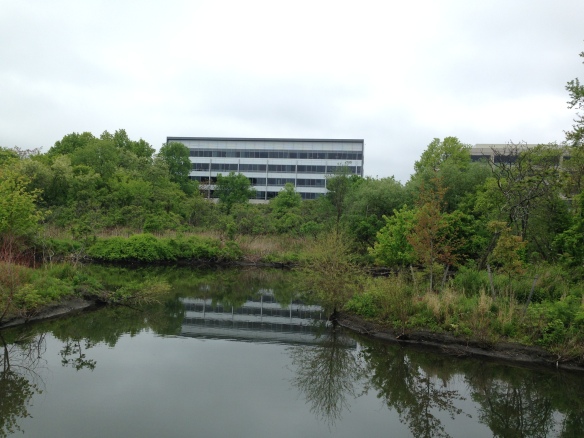 1 thought on “Building on the Great Swamp”